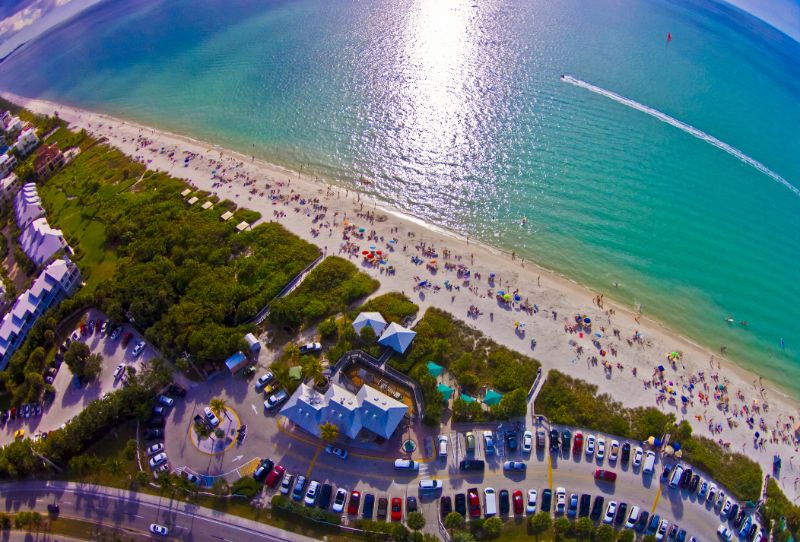 Bonita Beach is the beach section of the city of Bonita Springs, and it is very aptly named. “Bonita,” which is Spanish for beautiful, is exactly how anyone would describe this 2.5-acre sweep of white sand with lush palms and vegetation on one side and the aqua waters of the Gulf of Mexico on the other.

Located on Little Hickory Island, Bonita Beach is part of a series of beaches and is around ten minutes away from downtown Bonita Springs. The area as a whole is midway between Fort Myers to the north and Naples to the south, making it a convenient base from which to explore the region.

The facilities at Bonita Beach Park include a sand volleyball court, boardwalk, and sheltered picnic areas. While a popular beach, it’s relatively relaxed even on its busiest days. Even quieter are Little Hickory Island Beach Park and Barefoot Beach on the opposite ends of the island. The former is in Lee County and is a popular destination for surf fishing and the latter is a 342-acre nature preserve administered by Collier County. Bonita Springs itself is in Lee County, right on the border with Collier.

Real estate in the Bonita Beach area consists mostly of condo complexes and beach homes. The larger single-family homes, including one-of-a-kind estates, are concentrated mostly on the southern end and are close to Barefoot Beach. We’ll be happy to help you find the right home for you in Bonita Beach.

Keep up to date with the latest market trends and opportunities in Naples, Florida.