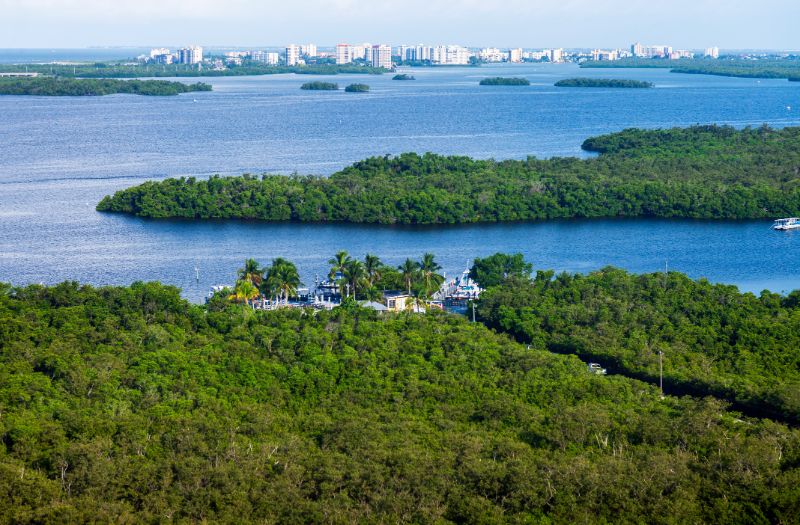 Tucked away halfway between Fort Myers and Naples is the serene, lushly landscaped village of Estero. Centrally located, it has easy access to the myriad attractions of the Paradise Coast, including Bonita Beach, Fort Myers Beach, and Lovers Key State Park.

Located in southern Lee County, Estero occupies an area of a little over 25 square miles, and as its name implies – “estero” being Spanish for estuary – its defining geographical features have something to do with its location along the coast. The village’s western boundary is Estero Bay and the Estero Bay Preserve State Park, a 10,000-acre natural wonderland where you can hike, bike, fish, or go boating or wildlife viewing. The other important natural feature is the Estero River, which winds its way through the northern portion of the village before emptying into the bay.

Once an agricultural community, Estero’s citrus groves have since been replaced with homes and numerous amenities, including the Hertz Arena and popular shopping malls like Coconut Point and Miromar Outlets. You can still get a glimpse of its colorful past, however, at the Koreshan State Park, one of Estero’s main attractions. Stop by and discover that Estero was once the “New Jerusalem” of a turn-of-the-century group called the Koreshans who believed that the universe existed inside a shell. The park’s features include historic structures as well as exotic ornamental vegetation.

Estero has dozens of different neighborhoods, gated and ungated, developed at different times. These include new master-planned communities as well as developments such as the 24-story The Island at West Bay Club. Single-family homes are the predominant property type and they come in different shapes and sizes, from airy Spanish Mediterranean villas to modern Florida Vernaculars. Townhomes and condos are also available, and those who’d prefer to build their dream home will find a range of lots and land. We look forward to helping you explore your housing options in Estero.

Keep up to date with the latest market trends and opportunities in Naples, Florida.